The 2012 24 Hours of the Katz-Spa-Ring was held in Escondido, CA at Brad's Tracks on Saturday/Sunday August 5 and 6. Cars used were the Wizzard Thunder Storm with the newly released hard body. Track voltage was 13.5v. Running time was scheduled from 11a Saturday to 2p Sunday. Things changed at the last minute to start at 10:15a Saturday with shorter than planned breaks between heats which allowed the event to finish up around 11a Sunday.

RagTag
Phil Laurio, Brad Bowman (While the race was in the planning stages, some drivers had expressed interest in coming for only a few hours. The idea was that they would join the Rag-Tag team when they showed. None came.)

Here are some of the updates coming during and shortly after the race. 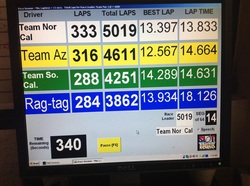 After 20 hours, this was the score.
Ron Coaxum via the TexasWestMotorSpeedway Yahoo! group. Sun, Aug 5, 2012 8:17 pm
[...] we didn't change the duration, just the starting time to 10:15am Saturday. Each team picked a number and that would determine the order you picked you car. We got second choice of car. Jeff [Hurley] was the qualifying driver for our team. He qualified first which gave us first choice of lanes. We chose lane 3 to finish on lane 2.


More information can be found on the Katz-Spa-Ring Facebook page.

On Friday, August 3rd, six of us from Northern California ventured down to Southern California to participate in the seventh 24 hours at the Katz-Spa-Ring. Our team consisted of Jeff Hurley, Ron Coaxum, Curtis Adams, Glenn Schneiderman, Jim Rose and Bob Raymond.

Greg Katz commissioned Brad Bowman to build this track in 2001. Unfortunately we lost Greg to a brain tumor a few years ago. To keep Greg's dream alive this track was moved to San Francisco. After that it was moved again to its new home in Escondido, California just north of San Diego. Escondido is famous for Lawrence Welk, San Diego Wild Animal Park and now the finest HO slot car track ever constructed.

The cars were Wizard Thunderstorms supplied by RC Lincoln. The spec body was the new Wizard hardbody, but we were allowed to bring our own body painted anyway we chose. We chose to duplicate the Red Lobster March from the 1980s because of Greg's fondness for the Red Lobster restaurant. The car number was seven as this with the seventh running of the 24 hours of the Katz-Spa-Ring.  We used Friday to get reacquainted with the track since most of us haven't seen it for quite a few years. Our practice cars seemed to be running in the mid 12 second range although Ron had one car that could run 11 second laps without too much problem. We tried to figure out what the difference was with his car and if any of that knowledge could be applied to the racecars would receive just before the race.

Race day started early with a very comprehensive drivers meeting by Brad Bowman.  Brad then held a guessing game to determine which team would get which car.  (note for next year: remember the number of Brad’s go cart)  We were given about a half an hour to shake down the car and make sure everything was working properly. After that each team nominated one driver for a one minute qualifying session with the single best lap used to determine qualifying positions.  Jeff Hurley was able to put our car on pole position and we were given first choice of picking our starting lane.  We would run three hours on each lane before changing lanes. After 12 hours all the teams would've run three hours on each lane. We then ran this rotation once more to complete the 24 hours.

At the start of the race, we ran 30 minutes per driver. After all six drivers had run their 30 minutes we were three hours in the race and we held a 65 lap lead.  We then switched to one hour driving stints and continued this rotation between drivers until the 22 hour mark.  We went back to the 30 minutes for driver rotation for the final two hours.  We seemed to be cruising right along up till about 12 hour mark, extending our lead with each driver rotation.  The Arizona team had very little practice, but were improving as the race went along. They now seemed to have the fasted car on the track, but we kept increasing our lead. Finally with about four hours to go our car started to lose its top speed. It would still turn 12 second lap times, but it had to be driven extremely hard.  We nursed the car home in the final hour and finished with 5737 laps.  Team Arizona second with 5309 laps, team Southern California was third with 4912 laps in the Ragtag team was fourth with 4436 laps.

The Wizard Thunderstorm cars held up amazingly well.  We never changed the armature or brushes for the entire 24 hours.  We did turn in the brush barrel screws to keep the brush pressure constant as the brushes wore down. At the end we had turned in the brush screws 2 1/2 turns and after looking at the brushes at the end of the race there was almost nothing left. Since we were only supplied two sets of tires we were allowed to recoat the tires with silicone when necessary. We ended up recoating each set only once.  As a side note our winning car was driven 185.8 actual miles.

I would really like to thank the hosts for this event Brad and Kathy Bowman.  Brad was the host, race director, and driver on the Ragtag team.  Kathy make sure we had everything we needed including sandwiches, brownies, chicken for dinner, bacon and eggs for breakfast, and coffee.  Also a big thanks to RC Lincoln of Wizard for the cars and bodies.  Last but not least I would like to thank all my teammates who made this a fun and enjoyable event.  And special thanks to Jeff Hurley for preparing our race car and keeping it running for the entire 24 hours and painting the race bodies.

Team NorCal hanging it out.

Spectators (VIPs?) on the monorail with EauRouge in the background.

Cars go through EauRouge with "Madness Corners" in the background.